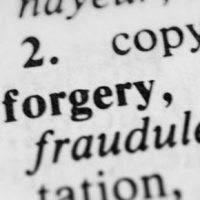 You have probably heard of people forging signatures, which means signing someone’s name other than their own on a document, to make it look like someone else signed the document.  Under Florida law, the definition of the crime of forgery involves producing fake documents in a way that makes them appear genuine, with the intent of defrauding the recipient of the document when such deception would cause financial or legal harm to the recipient.  Forgery is a serious crime in Florida; if you are convicted of forging documents, your sentence can include up to five years in prison, up to five years of probation, and a $5,000 fine.  Forgery is only one of several crimes recognized under Florida law that involve falsified documents and misrepresentations in written form.  If you are being accused of forgery or uttering of forged documents, contact an Orlando white collar crimes lawyer.

Defenses to Charges of Forgery or Uttering of Forged Documents

The fake letter from the victim’s crush could be considered harassment, but the others are obviously fictional, and recipients of the documents would reasonably interpret them this way.

Other offenses besides forgery and uttering of forged documents can involve the falsification of documents or records.  For example, if you make false statements on income tax returns, you can be charged with tax fraud.  If you falsify the accounting records of your business, you can get charged with money laundering.  Charges of mail fraud or wire fraud can also apply in cases involving falsified documents.

A criminal defense lawyer can help you if you are facing criminal charges for forgery, uttering of forged documents, or another offense involving falsified documents.  Contact Scriven Law in Tampa, Florida to schedule a consultation.

By Scriven Law, P.A. | Posted on October 14, 2022
« What Must The Prosecution Prove In A Drug Possession Case?
Biden Issues Executive Order Pardoning Federal Convictions For Simple Possession Of Cannabis »