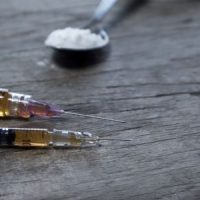 Fentanyl is scary, and getting criminal charges for drug crimes is scary, so getting criminal charges for possession of fentanyl is the scariest of all.  Fentanyl is a synthetic opioid that is about 50 times as strong as morphine; fatal overdoses have been reported where adult victims ingested as little as two milligrams of fentanyl.  The abundance of fentanyl in the supply of illegal drugs led to an unprecedentedly deadly phase in the opioid epidemic, as fentanyl is an inexpensive adulterant; some people have overdosed on fentanyl when they thought that the drug they were taking was cocaine, methamphetamine, or even cannabis.  In other words, some victims of fentanyl overdoses did not even know that they were taking opioids.  The availability of naloxone has vastly improved the survival rate for opioid overdoses, including those that involve fentanyl, but now researchers are working on developing an injectable drug that they hope will act as a fentanyl vaccine.  Meanwhile, when jurors hear the word “fentanyl,” they still tend to go into panic mode.  If you are facing charges for fentanyl possession, a Tampa drug crime lawyer can protect you from prosecutors’ attempts to vilify you.

The Beginning of the End of the Opioid Epidemic?

The current issue of the journal Pharmaceutics contains a study by a group of researchers at the University of Houston.  They have developed a vaccine that causes the body to develop anti-fentanyl antibodies.  Patients who developed these antibodies after taking the vaccine did not experience euphoric psychoactive effects after taking fentanyl, since the vaccine prevented fentanyl from entering the patients’ brains.  People with anti-fentanyl antibodies are still able to experience the painkilling effects of other opioids, so they would still be able to use opioids for pain management after surgery and in other medical contexts.

If and when this vaccine becomes clinically available, it could lead to several wide-ranging consequences.  Patients suffering from fentanyl addiction may have an easier time staying sober if they take the vaccine.  Fentanyl could become less desirable as an adulterant for street drugs.  Most importantly, it could lose its edge in the newsroom and the courtroom.

In the meantime, fentanyl can still kill, and possessing it can still result in a long prison sentence.  Even if you did not know that the pills you bought online or the powder you bought on a street corner contained fentanyl, you can still face criminal penalties if you knew that they were illegal drugs.  Therefore, if you are facing drug charges, the best thing you can do is hire a criminal defense lawyer.  Your lawyer will find all possible arguments that cast doubt on your guilt and may be able to show that the court violated your rights in seeking and finding evidence against you.

A criminal defense lawyer can help you if you are being accused of illegal possession of fentanyl or other opioid painkillers.  Contact Scriven Law in Tampa, Florida to schedule a consultation.

By Scriven Law, P.A. | Posted on December 9, 2022
« Which Crimes In Florida Are Most Common During The Holiday Season?
How to Avoid Legal Trouble When Traveling With Firearms »