Can Your License Be Suspended For Too Many Speeding Tickets In Florida? 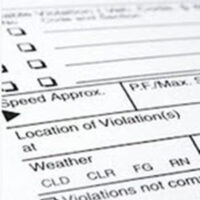 Andrew has gotten a few speeding tickets in the last few years. He was cited for going 10 or 15 mph over the speed limit on the highway. Another ticket was for running a red light. He also has three violations for driving while talking on a cell phone. Recently he was involved in an accident, and the responding officer wrote him a citation for speeding and following too close that contributed to the accident. Now he is concerned that his license might be suspended.

The Florida Highway Safety and Motor Vehicles Division (FLHSMV) controls the licensure of Florida state residents. Anyone with more than 12 points against their license is subject to suspension. Several traffic offenses carry multiple points each. For example, leaving the scene of an accident without providing driver and vehicle information is 6 points alone. A citation for reckless driving is 4 points. Each speeding citation is 3 points and speeding in excess of 50 miles per hour above the speed limit is 4 points. Failing to yield is 3 points, failing to yield to a pedestrian is 3 points, and failing to stop at a red light is 3 points.

If a driver accumulates 12 points within one calendar year, their license is automatically suspended for one month. 18 points in an 18-month period is a 3-month suspension, and 24 points within a 3-year period is a 1 year suspension. This means that for one incident where an officer fines a driver for reckless driving and speeding would be 7 points, more than halfway to a potential license suspension.

What is a Habitual Traffic Offender?

Don’t brush off a speeding ticket or traffic violation. It might not seem significant, but those tickets quickly add up to points. Before you know it, you could be facing a license suspension necessitating a hardship license. You can challenge a citation for a traffic violation, especially if you have good cause or mitigating circumstances for the alleged violation. In addition, if you have been labeled a habitual traffic offender or are facing a license suspension, you can challenge that as well, but will need the help of a savvy criminal defense attorney. Tampa criminal attorney Bryant Scriven is an experienced former prosecutor who serves clients throughout the area. Contact us today for help.

By Scriven Law, P.A. | Posted on October 15, 2021
« What’s The Difference Between Carjacking And Vehicle Theft In Florida?
Charged With Loitering Or Prowling In Florida? You Have Options. »